Nawałka – Between fear and admiration

In 2015, he was selected one of the best dressed Poles by the “Playboy” monthly. In 2016, the team lead by him gave millions of Poles unforgettable emotions by advancing to the quarter-final of the UEFA European Championship. A workaholic who needs just 3 hours’ sleep? A perfectionist precise like a computer program? A master of creating his image with very few words? A hypnotist, whose several gestures make the most talented players jump with him into the fire? A psychologist able to build relations with almost anyone?
Today, Adam Nawałka undoubtedly is an independent brand in the Polish football.

A brand – as experts have it – with a relentless potential and prospects for further growth. Nawałka lives football with no time-outs. And even when in the Play mobile network operator commercial he raises his eyebrows with surprise at the effectiveness of the selected business tactics when he chooses the mobile plan, he responds to remarks about his actor’s talent briefly: “There are still some hidden reserves”. So he uses exactly the same language as when talking to e.g. Arkadiusz Milik in the locker room: “There are still some hidden reserves”. Many football fans are wondering whether the team built by Nawałka in France has already reached the peak or does it still have some hidden reserves, just like the coach was hiding his actor’s talent?

Actually, Nawałka could wake up today and decide that he can have a lie in, because he does not have to prove anything to anyone in Polish football. He has reached the top. With Wisła Kraków, he won the Polish Junior Championship, while not that much later, as a player of the first team, he shone in European championships. And years later, as a coach, he added another Polish Championship to his list of successes with… Wisła Kraków’s victory. As a player on the Polish in the 1978 FIFA World Cup in Argentina – even though Poland didn’t manage to bring a medal home – he was chosen to the team of 11 top young generation players. Years later, almost in our times, as a selector he advanced the national squad to the UEFA European Championship in France, and upon return, he could say that his team turned out to be undefeated. Well, maybe with the exception of the penalty shoot-out with Portugal. What is it then that Nawałka should still prove and to whom? 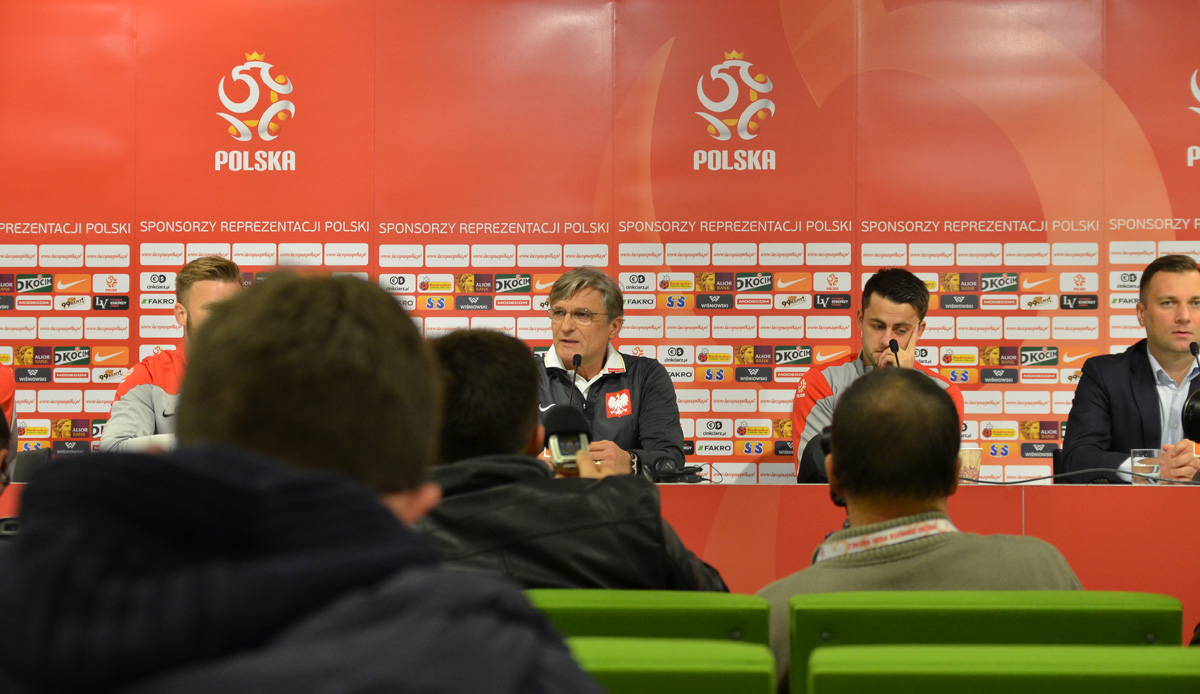 The conference organized by the partners of the Poland national football team – WIŚNIOWSKI and Fakro – which was also joined by Adam Nawałka is still fresh in our memories. The meeting was an absolutely exceptional thing, because ever since taking on the national squad, the selector has limited his public appearances to a minimum and only took part in the official national team press conferences.
“I am reviewed based on the results, not chatting,” this is how Nawałka usually explains his inactivity in the media. “If I wanted to argue with each opinion about my decisions, I would not have enough time left to work. This is why I focus on football.”
But his determination goes beyond that. In October 2014, he made an exception for the companies from the Nowy Sącz region to emphasize how important relations with the Polish business are to the national sport.
“It is just fantastic that Polish entrepreneurs appreciate the effort of Polish athletes and want to accompany the footballers in good and bad times,” Adam Nawałka said during the conference. “It is important in that it allows us to work comfortably and we can focus solely on the sport results. And I know what I am talking about here, because I remember how our club locker room had no hot water in the showers – and it wasn’t that long ago. But now we are one team.”
Interestingly, October 2014 turned out to be decisive for the Polish squad. Only ten days after the memorable conference, Poland defeated Germany 2-0. This victory against the world champions opened a new chapter in the Polish football, bringing results we had waited for for generations.

Even though Adam Nawałka is officially responsible only for the results of our national team, he actually personally takes care about every detail in the national football machine made up of numerous important gears and small cogs. Some time ago, the media used to flood fans with information about Nawałka peeking into the national team’s stocking bag to check if their quality is good. Are these just myths?
Łukasz Wiśniowski, sports journalist for the “Łączy nas piłka” (which translates as “united by football”) portal owned by the Polish Football Association (PZPN) can watch the selector’s work from up close. And even though Wiśniowski, being a member of the broad staff, does not let the secrets out of the national team’s locker room, he kindly talked to us a bit about Adam Nawałka:
“What amazes me most is the fact that the coach is building relations with every player in this team, from Lewandowski to people like us – the last links in the chain of this gigantic national team machinery,” says Łukasz Wiśniowski. “In spite of the multitude of tasks and the dynamics of the situation, he always finds time to approach everybody, to ask how they are doing and chat for a while. The coach famously sits down to drink his coffee in order to talk not only with the stars, but with every single player in the team. The amount of time he devotes to that is simply amazing. Those individual relations that he creates later translate into how important everyone feels in the team. Nawałka treats everybody on an individual basis and it is a very important quality of his”.

Optimism, positive energy, and even high energy are apparently all radiating from the selector in his everyday work, in particular during crucial matches and tournaments of the highest importance. Simply speaking, Nawałka is different than the majority of coaches we know:
“Nawałka is very different from his predecessors,” admits Antoni Bugajski, football expert and journalist for the “Przegląd Sportowy” sports daily. “Adam Nawałka has changed a lot ever since meeting Leo Beenhakker and becoming his assistant. Nawałka introduced several simple rules into his work and applies them consistently. At times, these rules heavily influence the sport aspect: the team does not do well, fans expect changes, but Nawałka unwaveringly bets on someone who we do not like. He does not change him, because the given player did not appear in the field by chance. He won his position during training. These are football players. And Nawałka gained his position thanks to consistent work and his peculiar organizational skills. He is a perfectionist, but also completely predictable. He is the perfect opposite of Franciszek Smuda, but also of Waldemar Fornalik, who was susceptible to opinions and suggestions e.g. of the media. Nawałka is not like this at all.”

“Adam Nawałka keeps his nose to the grindstone, I cannot express it in any other way,” says Łukasz Wiśniowski. “I have no clue how an ordinary person could bear this sort of pace, but, without a shade of a doubt, coach Nawałka is not an ordinary character. Me and my cameraman usually work late and the only chance to relax and work out is in the morning, before breakfast. And here’s a surprise. Despite the fact that the coach works with the coaching staff almost until the crack of dawn, he usually hits the swimming pool before us. This means that he must have slept around two-three hours and he is active again. Such levels of energy must certainly be inborn, because it’s simply impossible to develop this much vital power on your own. Now add his inexhaustible reserves of optimism – you never see him sad or down, he is always going full steam ahead – and this is the whole picture of Adam Nawałka. It is contagious, because when you see this guy, who has been through so much and has so much on his plate, you just realize you should have all the more energy, even if only because you are younger”.

Is Adam Nawałka completely unaffected by the opinions of the media and the Internet about himself? He certainly is resistant, but only he knows where exactly the limit is.
“He gives the impression that no kind of Internet nastiness or hate can bother him and the occasional criticism by the media just floats by,” says Antoni Bugajski. “What is going on inside him? It must get on his nerves to some extent, because no one is completely immune to that, but I don’t remember Nawałka ever doing anything just for show. Nobody was ever able to force him to make any squad transfers, which was frequently the case with the previous selectors. Is this consistency an advantage? There are some matches – like the one with Kazakhstan, for instance, or during the European Championship – where he failed to react to what was happening on the pitch because of his consistency. Sometimes, the coach should act crazy and move things around on the pitch when the team is not doing well. It seems that for Adam Nawałka, a match is like a computer program, where everything has to work, because he set it this way. This is certainly also an advantage, because when you agree on something with Nawałka, he will make sure to keep his end of the deal. A perfectionist bordering on workaholism”.

Nawałka is a classic leader type. Another Polish coach, Michał Probierz, liked to repeat the famous words of Argentinian footballer Gabriel Batistuta that the coach should evoke emotions falling somewhere between fear and admiration and Nawałka matches this model perfectly.
“The current selector has exactly those qualities,” Łukasz Wiśniowski admits. “You just feel respect for him. You either have this charisma or, well… you don’t. There is no middle ground. And charisma is what Adam Nawałka has plenty of, there is no question about it”.

Charisma was necessary on many planes of coaching work, starting with the seemingly simple task of “getting players out of their rooms”, as Nawałka used to call it himself. Easy? Not really. Different characters, some with prima donna-ish tendencies, others not really enjoying spending time with larger groups of people.
“This was of fundamental significance, especially at the beginning of the team-building process,” Łukasz Wiśniowski admits. “We were constantly going out somewhere, there was no sitting in rooms, only the so-called alternative workouts, e.g. going to a climbing wall, golfing, cinema, commuting on bicycles, and many other attractions. The purpose of this was to make these very different people spend more time together. And even if someone thinks this is artificial, this approach works and brings good results”.

Raymond Domenech, former selector of the France national football team, wrote a book entitled “All alone”, where he describes the source of his conflict with the biggest stars of the squad, including Zinedine Zidane. Domenech wanted all his players to have breakfast at the same time, which was a bone of contention. The stars did not like it and the issue grew out of proportion and ended with a complete disaster for that team. It is different with Nawałka. All the guys eat lunch and dinner together because these meals integrate the group. But they can have breakfast whenever they want, provided it is between 8 and 9:30 AM, because each body has a different day cycle and everyone recovers at their own pace. Nawałka understands this and this is why he did not make the same mistake as the France national team. As history has it, huge armies and teams with star line-ups lose battles and tournaments because scrambled eggs were overcooked.